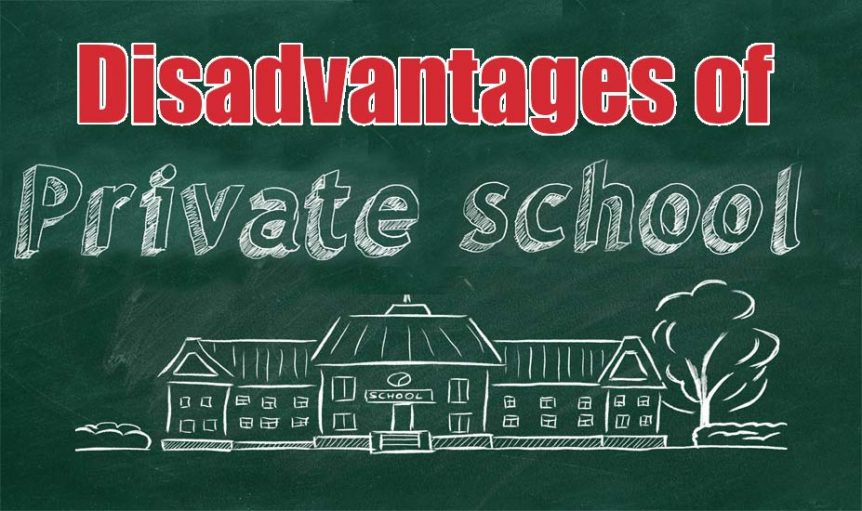 Private school was something I never questioned when choosing a school. I went to one and so my children attended one.

But when we moved our son to a public school I found that I wished we had moved him sooner. And also wondered if our daughter (now studying Science in University) would she have been happier in a public school.

I would say the cost of private school is the largest disadvantage for private tuition. The cost of fees can range from $4k up to $16k per year. This doesn’t include board which is available at most private schools, this can run to a further $25k+.

It also depends where in the US you live. Some states are much more costly than others. Connecticut and New Hampshire being at the top of the list.
Cost may not be an issue and fantastic if it’s not however most private school fees are going towards salaries of both teachers and admin staff. You may think that the money is being pumped back into the school but the reality is very little goes towards the development or upkeep of the school.

My husband commented on this I remember, the first time we visited the school. I thought it just had a kind of shabby chic to it. Building that was a few hundred years old. But my husband described it as needing a really good clean. I suppose I never really gave it any more thought but I should have questioned why the school we were paying top dollar for wasn’t investing more money into the school itself.

It was only when he moved to a public school last fall that I realized how much technology and support were missing from his private school.

I’m not saying every private school is like my son’s but it’s certainly worth taking a look at how much money is allocated to future development of the school you may have in mind.

How could this be a disadvantage I hear you ask? Well not every child is going to excel academically. Private schools are generally very academically focused. Their selling point is small teacher pupil ratio. Small class sizes where students can do better in subjects because they can ask more questions and teachers have more time to explain.

But this is only a bonus if your child is keeping up. Incredible as it sounds both my daughter and son needed extra tuition in Math and French respectively. So not alone were we paying huge tuition we now were paying an extra $60 per hour for our kids to keep up.

It’s not that they were doing badly but the expectation was there in class to nearly know the strand before it had been taught.

This is ridiculous in hindsight. I must have been off my head to think this was acceptable, but through out the school this was the norm. Even some students incredibly paying their own math or french teacher to give them extra tuition.

Although my kids are quite bright, my son is quite sport involved, (specifically Archery, he is on the National Squad). He wasn’t practicing this in school and although the head master was supportive I did feel that some of his teachers couldn’t really grasp the enormity of being selected for a National Squad.

They would give him a hard time if he hadn’t some of his homework completed because he had been training. I had cleared this with his form tutor, but it was nearly like.... “A sport? Where in life is he going with that?”

Which of course is ridiculous, as he could easily gain a sports scholarship to any number of universities and the benefit of having sport in a teens life is proven to be a fantastic way to motivate them and keep them in school.

Pressure to Fit In

Every parent wants their child to be happy, to thrive and most certainly fit in. And many parents think that by placing them in a private school that this will tick all of those boxes. And for many this is the case.

But when I look closely at this I feel that realistically they were misguided reasons. I didn’t fully fit into my private school education. We were by no means poor but compared to some of my peers myself and my sister just weren’t on the same level at all.

Our children were less different than their peers. We live in quite a rural, agricultural area and so many of their classmates were from farming backgrounds. Ours never missed out on any of the extra curricular trips or tours but there were a few in their year that simply didn’t go on trips due to the shortfall of money.

It’s something that needs to be considered. Are kids out of place in a private school if you can’t kit them out in all the latest gear or send them on those yearly ski trips.

The pressure to be socially accepted is so great for any teen. To put them in an environment where they ‘stick out’ is a recipe for disaster. If you child is very bright and has won a scholarship for example, you need to think hard about accepting it.

Are they going to be fully accepted by their peers? Are you going to be able to keep up with the pressure of passing fashion trends or spring break vacations?

A child that is offered a scholarship is no doubt incredibly bright, but this child will thrive in any school, public or private.

This is probably the biggest difference that was evident to me between private and public schools. My daughter finished all of her high school years in a private school where my son completed four years before moving to a public school.

During my daughters time we had to arrange for extra tuition in Math. When I spoke to her Math teacher about it, he simply said she needed to work harder in class. This is realistically a disgrace. No teacher should be happy that a student is paying for extra tuition. Especially when they are already paying!

I found a lot of my children’s teachers were just going through the motions. A few of the younger teachers were enthusiastic but once they got a couple of years behind them they transferred to a public school.

We think of private school having the best teachers and educators but the reality is that they are not as good as public school teachers. Many don’t have the benefits included in a public school contract, healthcare or sick pay.

They aren’t as well paid and their credentials are not always as high as those working in a state public school.

When my son moved to a public school last fall we could see the difference from the day we went to view the school. The teachers were so different.

They all had a positivity about them, willing and wishing their students to succeed. Any of the classes we dropped in on, they all asked my son what his interests were and did he know his future plans?

I know every school has good and bad teachers. I’m not naïve that some teachers do the bare minimum but being exposed to both perspectives I certainly think that the private school teachers were very much sitting back on their laurels. Shortly after our son moved schools he came home and announced that he wished he had moved sooner. His new teachers were ‘so much more interested’. This was what I need to hear. It was a big risk for us to move him. I was afraid he would hate it and ask to go back to his old school. That he wouldn’t gel with his new teachers or have difficulty making new friends but that hasn’t happened thankfully.

So why did we move our son from private to public? The main reason was he wasn’t happy. He felt he wasn’t getting the support he needed to pursue his chosen sport. As I said he is an archer on the National Squad. This doesn’t happen by accident. Being good enough for National Squad is a lot of training, hard work, focus and determination. He felt his school just wasn’t supporting him on his journey.

The school gym teacher was also his English teacher. They were ignoring the training that he was doing and even though he was handing in assignments they were sometimes a couple of days late because he was at a competition or training and he was being deducted marks because they were late.

He is not trying to pursue an athletic career, he’s actually hoping to become an Engineer, but the school couldn’t see that within archery there is so much engineering involved in his bow, they never really stopped to think about it.

Within the school sport wasn’t really part of the school ethos. The school was backing academic. I understand the thinking behind this. Parents that are paying for high school education expect results. Private school kids go on to private universities. I recently looked into the percentage of kids from my son’s private school that went on to University last year compared to his new school. I was shocked to see that his new school was outperforming his private school.

I think sometimes we forget the importance of sport. Not just for kids like my son who have found their niche, but all kids need an outlet past academia. It’s the best way for kids to switch off. Be it the proudness of being part of a team or excelling in a individual sport, or just the enjoyment of taking part.

A lot of private schools don’t put any emphasis on sport, including where my children attended. During the winter months the school puts the kids on a bus to the local leisure center to conduct their gym class because the school doesn’t have an indoor sports facility.

To be honest it never even occurred to me when we went on the initial school tour all those years ago that they never had a sports hall - but they had a fantastic library!

I’m not suggesting that all private schools are neglecting the importance of sport but it is certainly something that needs to be researched if your child is sporty.

There are pro’s and con’s to every decision parents make about their child’s education.

I was probably a bit blinkered when we initially chose private for our children because it was what I had for my own education. But I should have put the ‘snob’ in me aside and looked at all education options for our children.
I just assumed that private would be better.

When you spend extra on anything it’s generally better right? The reality is I should have moved my daughter in her senior years when I was told by a teacher she needed to work harder when she already had a 4.0 GPA. She was already working so hard she was doing nothing else but study.

Hindsight is always a great thing but I now feel she would have been happier if there wasn’t so much pressure on her. She still got the college course (Bioscience) that she wanted but was the pressure too much. I look at my son and see how much happier he is since the move. The advantages of public school outshine the disadvantages of private school, in this house anyway.